On the occasion of the launch of the semi-annualLuxembourg Presidency of the Council of the European Union, the Minister of labour, employment and social solidarity economy presented the agenda of Luxembourg under the sign of ‘the U. E. for citizens’, with an inclusive, sustainable and innovative growth. The Minister placed much hope in the SSE to reduce inequalities and to create employment, particularly in the ‘silver economy’, i.e. with an ageing European population. He has also stated the intention to take action in favour of employment for the people of both sides of the Mediterranean and launched the appointment on the 3rd and 4th December for the European social economy conference, which will be mainly devoted to the financing of the SSE.The panel final with Ariane Rodert, for the European Social Economic Committee, Jens Sheejish MEP,  Alain Coheur of Social Economy Europe and Jean-Christophe Burkel of the Luxembourg Union of social solidarity economy urged the Commission to relaunch the agenda of the Social Business Initiative. Some reactions of the public stressed the desire both to open the social solidarity economy, but also to better promote its specificities which do not consist in its social objectives, but have democratic governance and limited profit or the reinvestment in the community components.

For RIPESS Europe it is important to make the link with the COP 21 because the solidarity-based economy enterprises, being conscious of the environment in their practices, contribute to limiting climate change. Words for which the Minister took note. 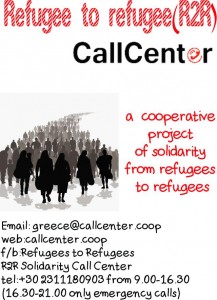 A cooperative Call Center from Refugees to Refugees (R2R)

Nationwide Social Economic Forum has been established in Hungary