by Ripess Europe
in Campaign
0 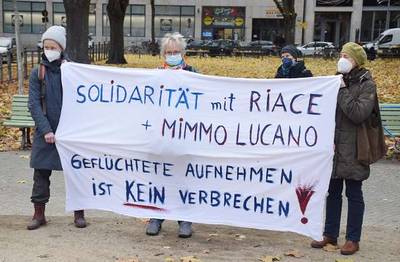 On the first weekend of November 2021, hundreds followed the “Call for Art” and demonstrated in Riace under the slogan “Abbracciamo Riace e Mimmo Lucano” (Let’s embrace Riace and Mimmo Lucano).

There was also a manifestation for Riace and Mimmo Lucano in Berlin on 6 November. 40 people made it clear: ” Welcoming refugees is an imperative of humanity and not a crime!”

See our previous article on Riace and its Mayor, Domenico (Mimmo) Lucano.

The sentence against Mimmo and his comrades is a disgrace

The deputy chair of NaturFreunde Germany, Uwe Hiksch, called the verdict against Lucano a disgrace. Domenico Lucano had shown what human rights and humanitarian work for refugees should look like. He should not be condemned for this. The German government should call on Italy to withdraw the obviously political sentence.

The sentence against the former mayor is part of the continuity of inhumane policies against refugees in the EU. It is completely unacceptable that people have to die almost daily on the various escape routes. Those who see the completely debilitated people at Poland’s external border should take to the streets and demonstrate for a humanitarian refugee policy of the EU.

Hiksch stressed that Germany’s restrictive policy of closure against refugees was largely responsible for the inhumane refugee policy in the Mediterranean or at the EU’s external borders, and called on all municipalities in Germany to actively support the campaign “Create safe havens for refugees”. He expects the new red-green-red senate to end deportations from Berlin.

Standing up for the rights of refugees everywhere

“On a regular basis, Berlin’s Foreigners Authority deports refugees unlawfully at night time, although this would only be allowed in absolutely exceptional cases,” criticises Nora Brezger from the Berlin Refugee Council. The entry into the flat of the deportee without a search warrant is also unlawful, as is the regular taking of mobile phones by the Berlin police and the targeted denial of access to legal protection.

“Instead of focusing on expanding the existing right to stay regulations and offering tolerated people a perspective, Berlin also relies on deterrence and deportation in many cases,” she states. Even deportations of people with disabilities or mental illness are not uncommon. Brezger demands: “Berlin must finally implement the paradigm shift already promised in the last coalition agreement, away from deportations and towards the right to stay.”

The organisers of the manifestation on 6 November stressed: “Solidarity with Riace also means standing up for the rights of all refugees everywhere. For those who are still on the move and for those who have managed to arrive in a safe place. The deadly borders of Fortress Europe prevent this far too often. They are Europe’s dead, dying of thirst in the Sahara, drowning in the Mediterranean, killed on the Balkan route or currently at the Polish border.” Too often, Berlin is not a safe place for those seeking protection.

See also the 15 October 2021 letter from the Rete Italiana per l’Economia Solidale here.