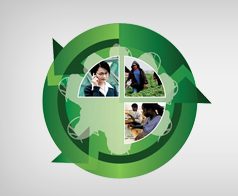 Social and Solidarity Economy . A Human-Centred Agenda for the Future of Work

The ILO Declaration on Social Justice for a Fair Globalisation (2008) states that “productive, profitable and sustainable enterprises, together with a strong social economy and a viable public sector, are critical to sustainable economic development and employment opportunities”.

Today, the Social and Solidarity Economy (SSE) is
a reality in many people ́s lives because it promotes values and principles that focus on people’s needs and on their communities. In a spirit of voluntary participation, self-help and self-reliance, and through enterprises and organizations, it seeks to balance economic success with fairness and social justice, from the local level to the global level.

The concept of SSE cuts across all four dimensions of the ILO’s Decent Work Agenda. A high-level capacity building programme on SSE was proposed by more than 200 participants on the occasion of the ILO Regional Conference on Social Economy held in Johannesburg, South Africa, in October 2009.

Known as the “ILO Social and Solidarity Economy Academy (SSE Academy)”, this inter-regional
training event has gathered together more than 500 practitioners and policy-makers from around the world, to share their experiences and meet leading SSE specialists.

In its 10th edition, the SSE Academy will have a special focus on the future of work, namely the challenges and opportunities posed by the rapidly changing world of work.

This Academy will be of great contribution to the ILO’s Future of Work’ centenary initiative.

Go to bit.ly/2XAyQTz to find the course. Deadline for registration: 30 April 2019

19th RIUESS Meeting: “SSE of culture and culture of SSE”

In search of Real Utopias