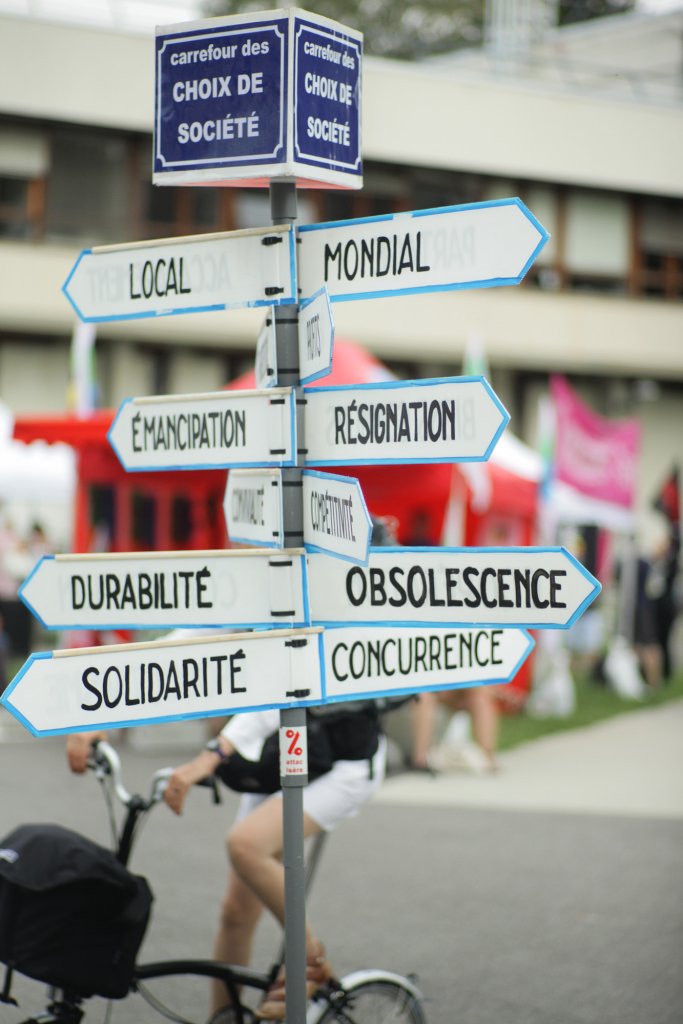 For 5 days, from August 23 to 28, in Grenoble (France), more than 2,200 participants took part in dozens of activities, including: 64 workshops, 33 modules, 11 forums. Around 300 organizations were mobilized. Attac and the Crid had wanted to combine their financial and organizational efforts rather than juxtapose two events that often bring together activists engaged in common struggles, under the beautiful title for 2018 “Solidarity-based and rebel: Summer University of the social and citizen movements” According to one of the organizers, the three fundamental objectives were: “the training of activists and new audiences, the convergence of movements, the defense and promotion of concrete alternatives”.
RIPESS and MES have been participating in these convergence moments for a few years now and have been the initiators of several modules in that direction (Paris 2015, Besançon 2016, Toulouse 2017). This year, we were mobilized by two workshops : On Friday 24, in the morning, “Economy and human rights” (see the interview of Bruno Lasnier (MES) and Laura Aufrère (RIPESS Europe) by TV bruits). In the afternoon, by the workshop “Citizens’ initiatives, general and common interest”. It was emphasized that these terms need to be precisely defined in their context of realization. The MES presented the role of the solidarity economy as a space of mobilization conducive to combining the three dimensions and each contributor detailed how the commons and the citizens’ initiative were at the heart of their objectives (Attac, CAC, the collective “Not without us”). These workshops brought together more than 40 people and gave rise to heated debates.

On Thursday 23rd, among the modules organised during the day, we were able to partially participate in the module: “The Commons : sharing, contributing and organising” which, based on the initiatives of Grenoble, Lyon, St Étienne and Lille, but also on several European initiatives, made it possible to take stock of the situation regarding the structuring of citizen actions around the commons: recovery of vacant spaces, development of local currencies, shared gardens, re-municipalisation of water, planning of public spaces,… These actions raise several questions: what structure around the commons? How to set up assemblies of the commons, with what governance and for what missions? How to build resource spaces (commons charters, platforms, maps, self-management models…) and how to link all the initiatives that are part of the commons? What links with the SSE and ecological transition networks already structured in the territories? All these questions were discussed throughout the day. Several movements of the commons organized a “COMMONS CAMP” during the five days of the university so that contributors could meet, exchange ideas and continue to strengthen the alternatives in our territories. More information (in French) here.

The Forum “When Feminists Move the Lines” brought together a large assembly in a packed amphitheater and not just women.

Florencia Partenio (DAWN, Argentina) described the struggle of Argentinian women for the right to abortion, the law of which has just been passed on by the Argentine Senate. Itzel Gonzales (Red Mesa de mujeres of Ciudad Juarez, Mexico) described the horrendous situation of women in factories on the Mexican-American border, who are exploited, beaten, raped, killed with total impunity, and her organization’s fight to have these crimes punishable. Louiza Belhamici and Fatima Ouassak (Class Race Gender Network) discussed the theme of intersectionality and animated with a frank anger spoke of their fight of mothers of immigration against the discrimination that their children suffer at school, and the disregard for their values, the straitjacket of confinement in communitarianism as soon as they meet, in short, all the discriminatory behaviors that are legion on the French territory (and elsewhere of course). The last speaker, Assumpta Barbens (IAC Trade Union, Catalonia), raised an unbridled enthusiasm by telling with great humor the success of the women’s strike in Spain and their mobilization in the face of the unfairness of the Pamplona judgment. “We will not let anything go in. The revolution will be feminist or will not be!” These concluding words sparked an ovation from the entire room.

Saturday the workshop “Actors and actresses of local solidarity and international solidarity: how to work together to raise awareness and mobilize more widely” organized by the festival of solidarity gathered a wide range of organizations that have tried to find answers to questions raisedon the same topic: how to get out of speaking to already convinced people, to escape from the aggregation of all middle class/white people and organize broader solidarities and reach a less organized but eager to act public. (see the ATD Quart Monde article)
I circulated the information on the flyer announcing the April Transformative Economies Forum in Barcelona, ​​whose perspective appealed to most of those present.

The weather favored the strolls in the city that had been organized outside the walls and the party organized by Alternatiba which hosted the Tour; Grenoble was one of the stages before its arrival on October 6 in Bayonne.
Several independent media were present (Politis, Reporterre, Basta, Le Media, Médiapart, Silence, Alternatives Economiques, Sans transition!, Le Ravi, Le Postillon Grenet). Radio Campus made live broadcasts throughout the university and we can see a TV Bruits “summary”video (Video of TV Bruits).
A university that sparkled energy and where we could note the absence of local authorities with the exception of Eric Piole, Mayor of Grenoble, though municipalism was the subject of a very busy module.
In the end we regret not having been able to attend more proposals of reflection and debates but convinced that the gathering of mobilizations is getting better and better to transform the economic and social vision which is so toxic at the moment while decidedly another world is possible (see the ATTAC web site). 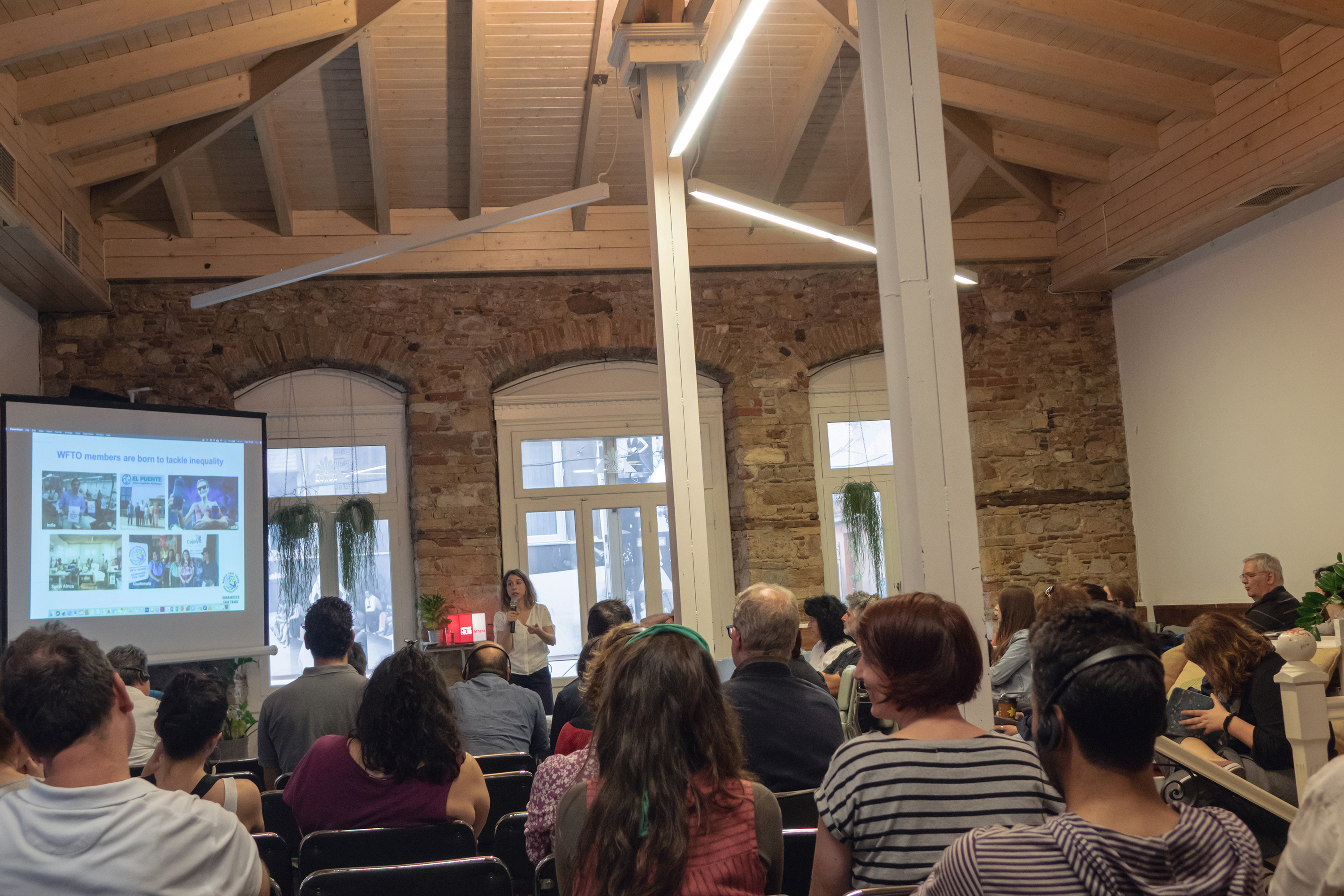 European Elections : The vision of Europe, through Fair Trade and SSE